From July 28th - August 1st, we had our first proper holiday in Korea. Me and Sophie took the bus down from Jeonju to Busan, which took about 4 hours or so. On arrival we met up with some friends who drove down the night before and made our way to the hotel which was only a stones throw away from Gwangalli Beach - cost was 60,000 won (£30) per night for a double room.

Just before we reached the beach, a couple of guys rode up on motor bikes, ones I've seen nothing like before. Some serious customisation going on here! 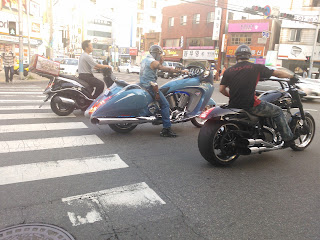 There are two things that I like about this photo, first is the way you have these two guys on beasts of bikes, then the guy on the far side rolls up with his little scooter and a honk of his horn! Second, after looking at the photo a little more closely, I notice the holstered gun on the guys hip - brilliant.
Anyway after being rather pleased with myself capturing this moment - thank you camera phone - we continued down the road to the beach.

The beach is beautiful with amazing views, behind you there's a strip of bars and restaurants that run the entire length of the beach that horse shoes round into the ocean with an amazing city backdrop. As you look out to sea from the beach, a bridge spans the horizon joining two sides of the city. At night the bridge lights up the ocean below for a spectacular view wether your relaxing on the beach, or enjoying a few beers in one of the many beach front bars. 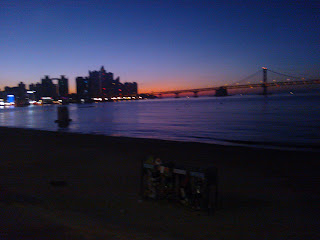 The following day we all piled into Scotts car and off we went to visit  Haedong Yonggungsa Temple. First built in 1376 during the Goryeo Dynasty, this is the first coastal temple ever built in Korea. I strongly recommend this to anybody who's visiting Korea. As you make your way down some winding steps, the trees break to give you a partial view or the temple and ocean. 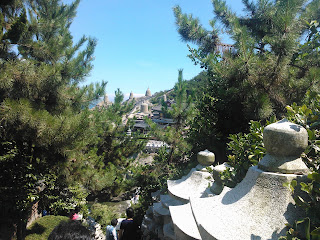 Soon enough the steps divide, to the left leads to the rocks below where you can sit with your feet in the ocean and enjoy the view. 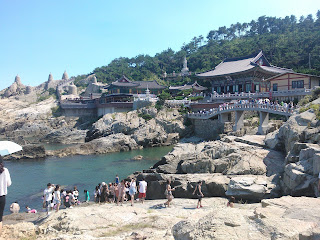 If you continue down the main steps they lead across the bridge you see above to the temple. On the far side of the bridge there is a water feature, and approximately 30 yards or so a chalice of sort. It is said that if you can throw a coin into the chalice from the bridge, you can make a wish. I suppose in much the same way as a wishing well, however you just need to hit the target. I did make a shot, however my wish ended up costing me more coins than it was probably worth. 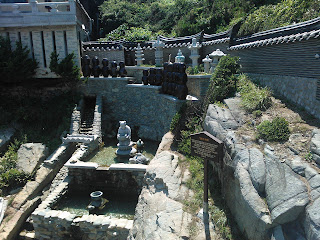 Over the bridge you find the main temple, theres lots to see here from huge statues of Buddha to hundreds of tiny dolls that adorn some rocks. There's a cafe for some food and you can enter into the main temple to say a prayer if you wish. The only advice I would offer is to avoid the public toilets here - not good and will destroy a little part of this beautiful place.

We came here during the summer, the weather was amazing which helped make the day. However I've read that many people visit here on new years day to watch the sun rise an make their new years wish. Also during April the cherry blossoms are in full bloom which I can only imagine changes the whole experience of this temple. 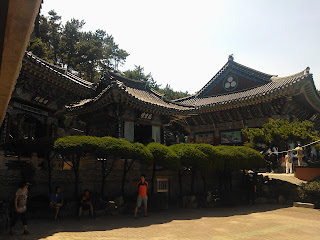 I have taken more photos which I'll add a link for at the end of this post.
We probably spent half our day here and feeling suitably cultured we decided to head back to Gwangalli to lay on the beach, play in the sea and drink some beer. Now as beautiful as it looks, the sea isn't all that nice. There's a kind of film to the water and there was a fair bit of rubbish, not so bad you wouldn't want to swim, but still wouldn't put my head under thats for sure.

That night we sampled a few of the sea front bars that Gwangalli had to offer, we found ourselves in a bar called Thursday Party, there are two in close proximity but one had great staff with great music. Much of the next few hours have somehow evaded me, can't think why.

After we left the bar, we loaded up with soju stumbled across to the beach and watched the sunrise from the ocean. This was certainly one sunrise I'll never forget. 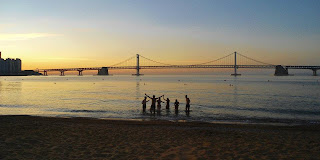 The following day myself and Sophie went to Haeundae Beach, it's easy to get to via the subway - line 2. Haeundae in considered the best beach to visit in Busan and it is beautiful. There is a bit more to do in the surrounding area as well, more bars and restaurants. We went for a really nice curry here, which is hard to find in Korea. We spent the entire day just sunbathing on the beach, then once the sun was no longer high in the sky, we went to Busan Aquarium , which is right off the beach.

I've got no photos from the Aquarium however because my phone died but it was fantastic. sharks, dolphins, giant turtles and some freaky ass fish I have know idea what they were. A good day out for all.

On our last day we had until late afternoon before our bus home. We decided to visit the Busan art gallery which was great, some great paintings, sculptures and instillation work. Also some amusing translation errors. 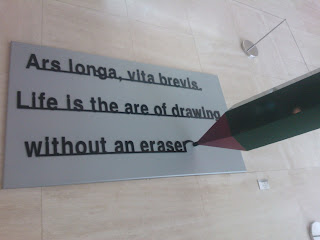 I have take lots of photos from the museum, I'll add a link to the full album at the end of this post.

Once we felt satisfied that we had pondered and critiqued everyones work with justified snobbery that one must in an art museum, we found that we weren't all that far from Bexco - Busan Exhibition Centre. Kind of like the NEC for us brits. We didn't know what was on but thought we'd chance it.

When we got there we couldn't quite get over the size of the place. As you walk into the courtyard, you are dwarfed by the surrounding buildings. 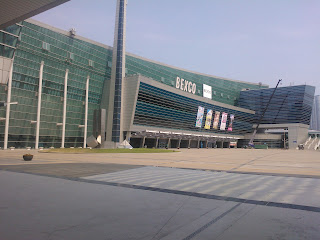 Here they had an indoor water park, and much to our surprise a David Lachapelle exhibition. I do like Lachapelle's work and Sophie has often spoken of how she likes his work so this proved to be the perfect ending to our trip. Unfortunately, my phone once again died so there are no more photos.
Sophie does have some so I might be able to add some later from her phone.

To see the full album though from our Busan trip please follow the link below: