On July 9th after our trip to the museums the day before, we decided to hike Martyr mountain, Martyr Mountain is in the southern part of Jeonju and is the final resting place of six Catholic missionaries, killed for their beliefs. We walked there from Hannok Village as we were told it was just five minutes away. Not quite true, it's about a half hour walk from Hannok and fairly easy to find.

The trail itself was beautiful and laden with 13 crosses marking the burial sight of members from the Catholic Church. We were the only people on the mountain and found it a very peaceful experience, however the humidity and heat made it a challenge, the climb is very steep.

Towards the top of the mountain - just as we were thinking of turning back around - we came across a Catholic Church, outside was a much needed water fountain and inside was a wonderful Church that anyone religious or not can appreciate. There was a lady inside playing some 'your going to die' music on the organ and after an hour of thinking we were the only people on the mountain, it kinda felt like a scene from a horror film! Still this is an amazing place I'd recommend to anyone.

As we reach the peak there's a traditional-style tomb that marks the final burial place of the martyred family, six painted circles on the floor which, I assume, is one for each family member. A man appeared from behind us and stood in front of the tomb to say a prayer, he moved to the largest circle on the ground to say a second prayer. He then followed the circles that lead to a path that took you up to a cross overlooking the tomb and I can only guess that here he said a final prayer.

Even if you aren't Catholic, as in my case, it's still an amazing and peaceful place to visit with some great views over Jeonju. 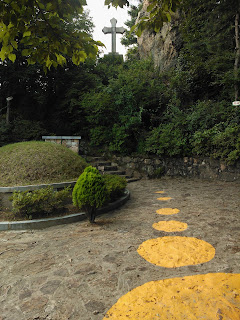 We decided to walk down the back of the mountain as there was a road leading down, it was hot and wanted an easier route but equally there were some great things to see. We stumbled across these statues and also Buddhist monuments. I've uploaded all the photos to my FB. Please follow the link if you wish to see all the photos from the day.