So last Sunday we were invited to join Jennifer for a hike up Daedun Mountain. Now I don't know about you but a hike to me suggests a good long walk, perhaps a slight incline from time to time, like a hike in the lakes for example. Here in Korea it seems a hike means full on mountain climb!

We took the one hour bus ride north to Daedunsan from Jeonju, pretty straight forward with a direct bus that dropped us off at the foot of the Mountain. As we walk up the steep hill past the restaurants and shops the first moment of doubt hits about the level of difficulty this hike will be.

I feel I should also mention the fact that the Euro 2012 games are at 1am and 3:45am here I was going off 1 hours sleep.

There were some interesting sights on the short hill past the shops, this being my favourite.
Now if I can just bring your attention to the white bottles around the base of the fountains piss bowl, they are bottles of Mokoli. A rice wine that we were introduced to by Casanova in Hanok. It seems they like it here...a lot! We're told that the Koreans, before a good hike like to partake in a little Mokoli drinking and there are stations all up the mountain that serve Mokoli. Now I don't now about you but getting pissed while climbing a mountain sounds like a bad idea to me! We decided to pass on the Mokoli this time.

As we progress to the mountain we start with an amazing staircase through the trees, never really sure where to look because there's so much to take in. Although I did find it funny that there was some work out equipment here, it seems that's another thing they like here, to work out while on a hike!

It's not long before the stair case loosens and the rocks become more uneven and scattered making this hike a little more of a challenge, not to mention the steep incline that the path is on makes it feel more of a climb than a hike.

Soon enough the trees begin to break and due to the steep incline the views begin to emerge. It was a beautiful day with only a few clouds in the sky which proved for some great views.

Daedun Mountain is know for it's suspension bridge, which I think is one of if not the biggest suspension bridge that connects two peaks of the mountain with an 80M drop. This is where I start to get excited with ideas of Indiana Jones re-enactments and photo opportunities and Sophie becomes a little nervous. By the time we reach the bridge the 80M drop turns my stomach a little and a moment of worry before thinking just how brave Indi must have been to cut that rope!


We progress up the mountain with yet more amazing views until we got to the suspension staircase, yep, not only do they have a bridge but they have a staircase which is round about 60 degrees steep with waist high hand rails. This was a little easier than the bridge but as you got higher you could feel a slight sway and when you turned around, well, the view and feeling was amazing. It felt as though you were right on the edge with nothing disrupting your view.


Ok so hard part over, to think people climb this in winter when it's all snow and ice! It's not far now to the top of the mountain, round about 20 minute climb up yet more steep rocks and another stop point serving food and Mokoli - seriously these guys are crazy - we reach the top.

If you notice the guy to the left of the picture, you will see he has a large rucksack. We started chatting with him and he had bought up everything he needed to make Bibimbap - a Korean vegetarian dish - he the put his bag down, pulled out a container full of chunks of watermelon and handed out fork's to me and Jennifer, he didn't have a third so Sophie got the ladle. Being given watermelon at the top of the mountain was the last thing I would have expected when I woke up Sunday morning but it was just what was needed.

If you notice in the background the guy on the cliff edge outside the railings - now look over his shoulder in the distance you'll see another guy on the cliff edge! I've no idea how they get there but it was the same throughout the hike, there seems to be no set path, only a guide to the safest path as the Koreans would be all over the mountain standing on some edge just waving as though it was normal.

Pics from the Peak just under 900M 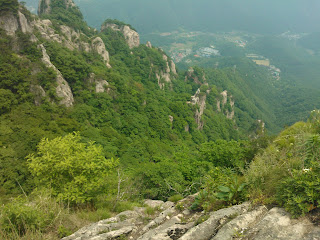 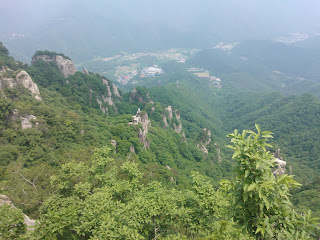 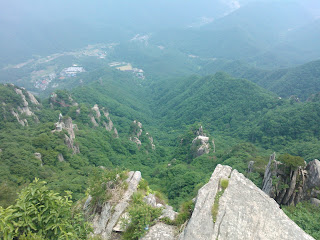 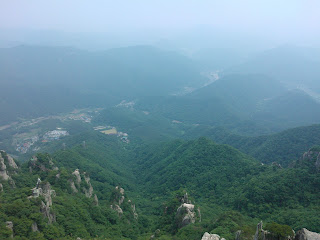 Now for the decent...to be continued :)